A submarine communications cable is a cable laid beneath the sea to carry telecommunication signals across continents connecting many countries.
The first submarine communications cables carried telegraphy traffic. Subsequent generations of cables carried first telephone traffic, and then data communications traffic. All modern cables use optical fiber technology to carry digital payloads, which are then used to carry telephone traffic as well as Internet and private data traffic. They are typically 69 millimetres in diameter and weigh around 10 kilograms per meter, although thinner and lighter cables are used for deep-water sections. As of 2003, submarine cables link all the world’s continents except Antarctica. 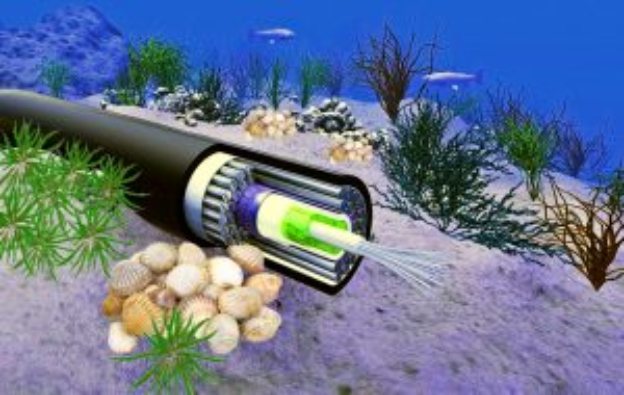 Modern cables for the deep-sea sections have an outer diameter of approximately 25 millimeters and a weight of around 1300 kilograms/kilometer. In a submarine oute the deep-sea sections comprise the majority of the run. Larger and heavier cables are used for shallow-water sections near shore.
Submarine cables first connected all the world’s continents (except Antarctica) when Java was connected to Darwin, Northern Territory, Australia, in 1871 in anticipation of the completion of the Australian Overland Telegraph Line in 1872 connecting to Adelaide, South Australia, and thence to the rest of Australia.