One of the strong disadvantages of fiber optic communication was the high development cost. It was especially true in the case of Fiber to the home technologies. Due to the high deployment cost of FTTH broadband, high speed high bandwidth services remain accessible to those subscribers who could afford to pay a high monthly charge to the service providers. This is the disadvantage of fiber optic based broadband even today in many of the geographical areas.

The cost of FTTH broadband deployment varies according to the geographical area. The cost implications are not limited only to the metropolitan and rural areas but the hilly and plain terrains. A scientific study and approach of service providers in their respective regions of services will help them figure out to decide what kind of broadband technology or last mile deployment would be suitable and economical to make reasonable revenue. 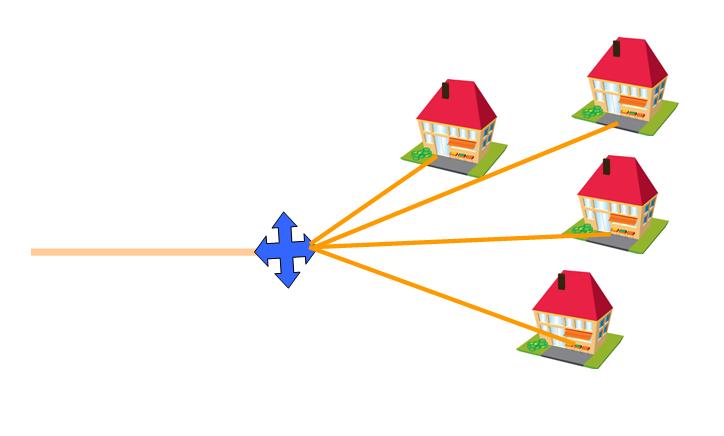 Fiber to the home broadband to the village or suburban residents need more deployment cost compared to that of metropolitan FTTH deployments. The studies conducted on deploying optical fibers to different geographical areas say, on a comparison, the metropolitan area FTTH broadband deployment cost per household on an average is approximately US$ 1000. Metropolitan areas have much densely populated clusters of multi-dwelling apartments. Hence the deployment to such multi-story buildings is easier compared to any other scenarios.

The advantage in the case of metropolitan installation is that the urban population tends to opt for higher bandwidth services if available and thus almost all of the investment by the telecom operators turns into revenue generating connections, though it is not directly connected to the deployment cost.

Another FTTH broadband deployment scenario is in the suburban areas or the city outskirts, where the distance between the houses is more than that in the metropolitan areas. Suburban areas also have high density multi dwelling units, but the distance from the central office is more and the access is much more difficult than that in the case of urban deployment. The Average FTTH deployment cost to plain terrain suburban or village households is approximately US$ 6300, which is almost 6 times costlier than the metropolitan FTTH deployment.

The highest FTTH deployment cost is claimed by the suburban households in the hilly geographical areas. The development cost is approximately US$7000 per household. This is almost 7 times costlier than the metropolitan area FTTH development and 1.2 times costlier than the plain terrain suburban FTTH development cost. The breakup of cost components shows the central office equipment costs are almost the same in all the above development scenarios, though metropolitan central office installation shows slightly lower cost compared to all others.

Cable cost is also less for the metropolitan FTTH development by almost half of the other scenarios. The big difference is in the construction cost, which is the cable running cost. FTTH council studies have also shown that the major contribution to the cost comes from the civil works, which is the construction works. The cost of fiber optic cable in an FTTH project is less than 6% while the cost of civil works claims approximately 70% of the project cost. Thus the new innovations need to happen in the cable designs that will reduce the civil works drastically so that the overall FTTH project cost will come down.

This post might have given you a rough idea of how the FTTH broadband development cost varies according to the geographical conditions and population density in general. You may have something different to say than what is written here. Welcome with your suggestions.

Definitions of FTTH and FTTB

What are the Deployment Options for the Last Mile Fiber Network?

How to optimize FTTH Network to Save the Deployment Cost?